46. Are you guilty of these texting sins?

Texting. I didn’t fully appreciate this art form until I got unlimited texts. I figured that if you had something to text, you might as well call someone up and just tell them. I could not be more wrong! Texting is amazing for passing on jokes, keeping entertained in lectures, communicating things you’re afraid to say and for boring, menial things. If I rang people up asking them where they were for every time I texted them that question, they’d probably change their number.

But like with everything in life, you get all sorts of texters. I am guilty of falling in more than one of the categories below from time to time. I’m sure you guys do too.

Those who reply instantly
It’s like these people are just waiting for your text. I can’t even hit the send button in 2 seconds it took them to type a fully-formed response. Unless it’s a boring text, I need to spend a bit of time thinking of an answer and then reading over it to make sure I don’t sound like an idiot. When people reply instantly, it also puts pressure on you to reply quickly too which normally leads to  some long arse texting marathon.

Those who chat speak too much
These people ought to be charged for abuse against the English language. They butcher every other word claiming that it’s faster. How is ‘iz’ faster to text than ‘is’? It takes me longer to decipher their message than to actually respond.

Those who go crazy with emoticons
This is a text, not Pictionary. Please express yourself in sentences so that I don’t have to guess what you mean. Some people take it to the other extreme too. They’ll send about 20 smiley faces. I got that you were happy after the first 3.  Similarly for sad faces.

Those who use the number of x’s at the end of every text to express their feelings
I personally think using x’s is redundant. Used sparingly, it can be cute but if you end every text to every Tom, Dick and Harry with xoxo, it means nothing. I know people who count the number of x’s their boyfriend/girlfriend sent to decipher how they’re feeling. Oh shit she only sent 2 x’s. She must be pissed with me from yesterday. What is this? xoxo-ception?!

The lol-ers
Lol- pretty much the go-to response when someone doesn’t actually give a toss.
‘I’ll see you tomorrow’. ‘lol cool’.
What is amusing about that statement?
If I said I got hit by a car, would you lol then too?

Those who never reply because their phone is always off or they have no credit or battery
The lack of credit is becoming less of an issue with the emergence of Whatsapp but back in the day, it used to be really annoying. Why do you have a phone if you don’t have enough money on it to actually use it for its primary functions ie. to call and text? Similarly for having it switched off. Why have it at all? Might as well drop it into the ocean for all it’s worth.

Those who reply with essays
Some people have real trouble being concise. You might have asked a simple question and this person will reply in paragraphs weighing up pros and cons before coming to a conclusion. Alternatively they’ll just add a lot of redundant, pointless information which you’ll have to sift through before you actually find the answer to the question you asked.

Those who never let the conversation end
This person just has to have the last word even if it’s ‘haha’. Now if you have 2 people like this texting each other, you’re gonna be there a looong time. There’s also the classic trick of including at least one question in your reply which essentially forces the person you’re texting to text back or else they look rude for ignoring you. We’ve all done it. Don’t even deny it.

Those who give you one word answers
These people actually anger me. If I’m texting you, I probably care about your opinion and if you reply saying ‘k’, your opinion is about as useful as a watermelon’s. Talk about killing the conversation.

Those who just don’t reply
If I wanted to be ignored, I’d strike a conversation with a brick wall. To be honest that would less disappointing than talking to these people. At least I don’t have any expectations from a brick wall. The most common excuse for this behaviour is that they were ‘too busy’. Oh I’m sorry, I didn’t know I was too insignificant for you to find time in your important life to reply to a simple text. I noticed you had time to go on facebook and whatsapp though. 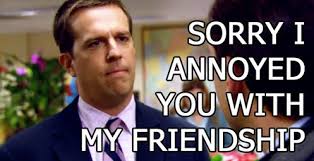 45. Woke up in London yesterday, found myself in the city

47. A Bizarre Encounter With A Bus Driver