I did it- I graduated! I survived four years of attending lectures, frying my brain over mathematical theory and stressing over exams and you know what, I’m damn proud. Some people think a degree is just a glorified piece of paper and whilst that statement is not completely inaccurate, for me it feels like something I earned.

Graduation has felt like something a long time coming. Imperial really make you wait; I was done in June but the ceremony was in October. What’s weirder is that I’m working now and don’t feel like a student any more. Going back to uni felt like walking into a previous life, like I was retracing old footsteps and reliving memories. It just goes to show how quickly we move on. But it was totally worth it. The venue, the Royal Albert Hall (a stone’s throw from Imperial), is just spectacular. How many people can boast of such a fine graduation setting?! And it was lovely to see everyone again and hear what they’ve all been up to #reunion.

The day itself was pretty manic- a mad dash from one place to another. Get to uni. Get the gown. Get some informal pictures. Get some official pictures. Attend the ceremony. Attend the reception. Keep track of my family members at all times (very difficult btw when one person needs the loo, someone else wants to wander around the campus and someone else wants to get food). I’m so glad I bought a change of shoes because I really was running around like a headless chicken.

As for who attended; my proud parents of course (who were literally beaming all day), my cousin Mele whose graduation I attended a few months ago and my aunty who came especially from France. It really felt like a family affair which is exactly how I wanted it to be.

Because I was super eager I bought my dress months in advance which turned out to be a very good decision because I seriously don’t have time to shop these days. I found the dress online (from Next) and I think I fell in love with it on sight. It is ivory colour (shutup that’s not the same as white) with embroidery on it and it’s just so well made and a very flattering shape. Better yet it was friggin 65% off. Hell yeah.

But enough chit chat, here are some photos.

Me and Shakira looking awfully pleased

Me and Mummy outside the Maths building

On the steps of the Royal Albert Hall

Sitting in a lecture theatre for the last time

James being classy as ever and Shakira

And if you’re really interested, here’s a video. Skip to 52:20 . Notice my stupid wave to the camera, immortalised forever on YouTube. But hey at least I didn’t stack it.

It’s the night before my final exam. At this point, I’m not even that fussed how tomorrow goes as long as it’s over quickly. I probably ought to have done more revision considering I need a minor miracle to balance out the mess that were my others exams…instead I decided to make this…an oragami dress. I think it’s pretty cute. 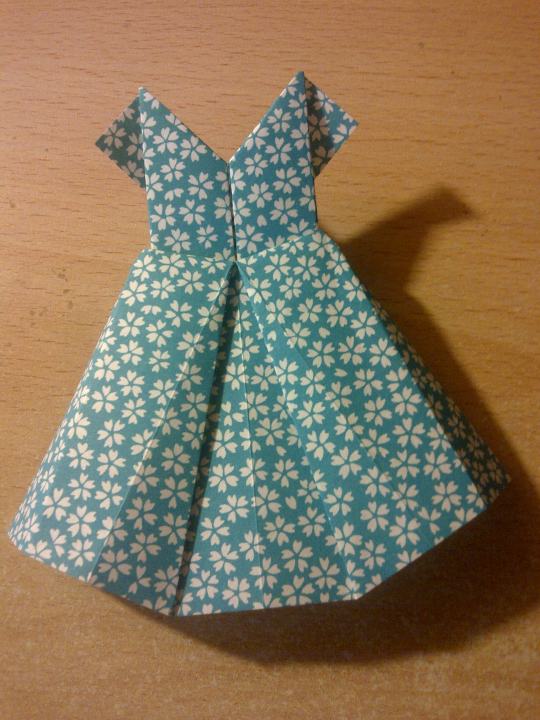 Finally got around to using my oragami paper!

The folds as seen on the back

A few people wanted to try this for themselves. Here’s the site I used- it’s really good and the instructions are clear. Have fun!

James had his 21st birthday party at a really nice posh place near Victoria. Turned out to be an awesome night! Looking over my last few posts, it looks as if I go to parties/weddings all the time. I don’t usually- honest! This is a random burst of activity before the social hibernation that is exam revision time.

James was pretty clear about the dress code. We were to come in dresses which gave me the opportunity to get my bargain prom dress out of my wardrobe. I haven’t worn it in about 4 years but I had a really special prom and thus many happy memories associated with that dress. The only problem was that I had to take the train there. Where lies the problem you may wonder… well my coat is quite short and my dress is quite long and coat on top of dress looks pretty darn ridiculous. Add public transport and unwanted attention and you get a problem. What I ended up doing was tucking my dress into some jeans (yay creased dress!), wearing flats and putting my heels in a separate bag. I was also wearing tights under my jeans which is one of the most uncomfortable feelings in the world and the tights were so tight, they felt like Spanx aka. a corset for my legs.  Highly unpleasant. It also rained on the way so my hair, which looked nice and tame when I left home, looked flat and lifeless by the time I arrived. Greattt!

Everyone was looking super dapper, particularly James who was looking extra boom in a suit and tie.

Me, Meeti and Suzannah (unintentionally wearing all black)

My friend Meeti has a special diet which essentially cuts out eggs, meat, fish, onions and garlic. James alerted the caterers about this and gave them a week to come up with something for her. At the start of the evening, Meeti was told that the Head Chef was specially preparing her meals and that they would be brought to her. It felt like VIP treatment and I was really impressed. Unfortunately they seemed to think her diet was also gluten free which imposes further restrictions. The waiter walked in with an impressive silver tray and lid and theatrically lifted it to reveal this as her starter:

That’s right. Boiled veggies. We were rather bemused. For mains she got extremely salty aubergine and courgettes slices piled into a tower with spinach. It was probably not the most appetizing meal compared to the lamb and vegetable lasagna everyone else was tucking into. Things ended well though because James’ birthday cake was a beautiful, super tasty eggless cake that Meeti (and me) scoffed. Om nom nom!

I promised James I would dance (badly) at his birthday and I did. Me and Meeti kicked off our shoes and busted a few dance moves on the floor. About 20 of us performed the Macarena and everyone had great fun Gangnam styling. I think my rotating lightbulb dance went down quite well!

Basically…. I had a really good time! Woo!