Best use of opera music ever.

Of course this is only for the week before the exams. The rest of the year we do fuck all. But still. That week.

*runs out into the sun arms outstretched*

Well hello there! My term ended last Thursday and whilst I thought it would be an emotional day having my last lecture, it turns out I was just pretty darned relieved that I didn’t have any further content to revise.

Which brings me onto REVISION. I’ve only just begun and I’m already sick of it. Too much bloody content. Anyway during this rather horrible period I always feel a bit shit so I thought I’d remind myself and share with you guys that I’m not actually (completely) incompetent.

Without further ado, here is a list of things I *think* I’m good at:

140. What I tell myself v. What actually happens

What I tell myself: I’ll just have a quick nap. I’ll be so alert and energised afterwards.
What actually happens: Omg it’s tomorrow.

What I tell myself: Oh god I’m so full- I cannot eat another bite.
What actually happens: Oooh ice cream! I got room for that.

What I tell myself: I’m going to try all of these questions without looking at the answers. The struggle is part of the question.
What actually happens: Fuck it where are those solutions? Ain’t nobody got time fo’ this.

What I tell myself: Omg he’s a douchebag- I’m never speaking to him again.
What actually happens: Hmm it’s been an hour. Maybe I should say sorry.

What I tell myself: I am going to do lots of revision today.
What actually happens: Hole punching my notes and neatly putting them into a folder counts as revision right?

What I tell myself: Ehhh I don’t want to have a bath.
What actually happens: I am a dolphin. I am a mermaid. I’m never leaving this tub.

What I tell myself: I shall read sophisticated books to improve my vocabulary.
What actually happens: Where’s my copy of 50 shades of Grey?

What I tell myself: Now that I’ve bought new kitchen utensils and oven equipment I will become a domestic goddess.
What actually happens: *eats Cornflakes for dinner*

What I tell myself: Saving a document? I’ll save it as ‘shizzle24’. It is both descriptive and I’ll remember exactly what it is in future.
What actually happens: *in the future* God dammit why do I have 36 files called shizzle.

What I tell myself: I’ll just watch the first episode of this series to decide if I like it.
What actually happens: What do you mean there are no more episodes to watch?! I’ve only watched 3 seasons in 3 days.

What I tell myself: I should really sort out my underarms.
What actually happens: Hmm forgot to do my underarms. I’ll just get through the day avoiding lifting my arms at all cost.

What I tell myself: I’m going to get up 10 minutes earlier so that I don’t have to rush.
What actually happens: Leaves 5 minutes late.

What I tell myself: I’m going to make an effort to look presentable and female.
What actually happens: Unflattering jeans and hoodie it is.

Like every other student I promise myself year on year that I will do better, that I will work harder and be more organised. Every year I end up short of my expectations. Nonetheless today I make my annual student pledge to improve on last year (and trust me there’s a lot to improve on).

To really drill it home I’ve decided to publish my pledge here on my blog, immortalised on the internet so that I can look back in shame if I fail.

I Aliya, hereby promise the following:

I really want to do well and leave university on a good note. Hopefully the fact that this is my final year might be the kick up the arse I need.

I think I felt something akin to euphoria the moment I heard the invigilators say ‘pens down’ for my last exam. I had been dreaming of that moment for almost two months and to finally hear it felt liberating but also surreal. I could not wipe the grin off my face; it also helped that I thought the exam went decent, though it’s very hard to judge this sort of stuff.

I genuinely felt like I lost a stone in mental anxiety. It might sound dramatic but having to go home every day and force yourself to revise and then get distracted and then feel guilty for procrastinating is a tiring process. It is miserable, lonely and quite frankly depressing- by far the worst part of the uni experience.

But it’s over! No more whining from me! (okay maybe a bit but I’ll keep it to a minimum)

So how did I spend my first bit of freedom? Well I chilled in Hyde Park with some of my favourite people in the world as per tradition. The sun made a welcome appearance too. I lay on the grass and basked in the fact that my mind was completely clear. Later we practiced handstands and decided to go rolling down hills like real 21 years do. Oh and we took fun photos! 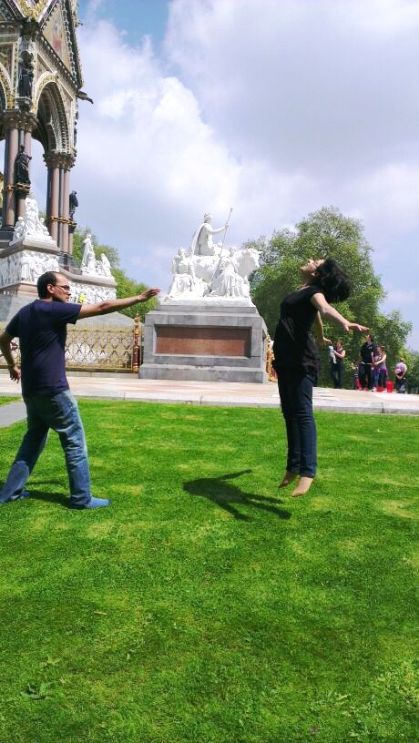 Just Vadering in Hyde Park as you do…

On the way to the station, guess who we saw? You’ll never believe it! The Queen! We saw the Queen! We were about to cross the road when this policeman comes out of nowhere with a whistle telling everyone to hold it and before we knew it, this fancy maroon car rolled past, flag flying and upon closer inspection we could see the Queen sitting inside wearing mint coloured clothes and a hat. The tourists started clapping and in that moment I felt pretty patriotic. I only saw her for a few seconds and I was in awe. It was perfect timing too. Had we been even a few seconds late, we would have missed it!

When I got home my mum gave me a huge squish and I could see the relief on her face too. Obviously five minutes later, she started listing all the things I promised I would do once my exams were over…shopping, cleaning, gardening, making roti, meeting all sorts of random people. But I’m not complaining; I’ve been saying ‘yes’ to everything.

Then I went clubbing and got absolutely smashed. Like I was sooo out of it. It was awesome.

In the evening, we took the party to Northwood and I celebrated with my cousins and by celebrate I mean they told me all the gossip from their school and we watched videos on Youtube but it was just what I needed.

However I did want to do something silly to mark this momentous day and so I decided to watch two episodes of House at 1am even though I was tutoring the next morning. A silly decision to mark the end of a prolonged season of studying and seriousness. Perfect!

(Muchos gracias James, Shakira and Dania for the ideas)

Every year, I reach a point during revision where I decide I don’t care. Today is that day.

I am so tired of this. I don’t want to revise. I don’t want to do these exams. I’ve been doing everything to avoid it. I’ll eat, catch up on House, decide to start doing sit ups because sure right now is a great time to start an exercise regime, right? But then I suffer this gut wrenching guilt for not spending my time wisely. All this proves is that I do care. But I wish I didn’t.

I could loosen up and settle for a 2:1. That’s good right? I can get a job with that. Can I live with it though? Is it good enough for my parents? As much as I try to convince myself otherwise, I know the answer deep down is ‘no’ but if I don’t sort this out, that is where I’m heading.

Why have I decided to stay on for another year? Surely I don’t love Imperial so much that I’m willing do this all over again. This is sucking my soul. Please let this be over soon. I don’t want to do this anymore.

*heads back to notes*

It is that horrible time of year again… exam revision. This has got to be the most depressing, frustrating and lonely part of my degree.

Revision means the end of my social life (which I was trying to fit in as much as possible beforehand). I have this bad habit of really letting myself go when I don’t have to go out. It’s only been a few days and my hair is already greasy, I smell like curry, my face is pasty and I’m sitting here at my desk in my onesie. Please no-one ring the doorbell.

This is also the time I will do ANYTHING to avoid revision such as:

Every year I tell myself, I will makes good revision notes while I’m studying the module and every year I end up making them in April. Such a horrible horrible cycle of not learning from my mistakes. *shakes fist*

To makes things worse, I feel hungry pretty much all the time (I think this some psychological ploy made by my scumbag brain to further avoid revision) so I eat up eating everything so now not only am I not working, I’m also getting fat. Dammit.

It sucks having to sit in my room trying to convince myself to get work done. It’s not like I don’t have any motivation. I desperately want to get a First in every module this year (with the exception of Managerial Economics) but clearly I want to watch cat videos on Youtube more. I am convinced that it doesn’t matter where you start from on Youtube, you WILL eventually end up on baby or cat videos.

Revision is lonely. It’s something you have to do by yourself. To do this, you have to commit to being holed up in your room with only your fan heater and your music for company which is pretty darn sad. The shitty weather here in the UK does nothing to lighten the mood either. My parents, bless them, do so much to make sure I have what I need. They pop in and say hello and bring me tea but they can’t exactly help me when I’m stuck on a proof or if I’ve forgotten how to integrate. Le sigh.

With all this said, so far today I’ve been quite good. I’m on Chapter 5 (of 19) of Credit Scoring and I aim to finish up to Chapter 7. I will let you know how I far I get next time.

Good luck to anyone else who is also revising!