The end of term is fast approaching and I couldn’t be more grateful. I am exhausted both mentally and physically; I think commuting 3 hours a day has finally taken its toll. Over Christmas I have a truckload of work to do (will it ever end?!) but at least I’ll get to do it in the comfort of my home where I can wake up when I want, eat when I want and work on things at my own pace.

I believe I complained about one of my modules (Stat Theory) in my second to last post. You’re in luck- I’m going to complain about it some more. I had my last every lecture for it today *Hallelujah!*. Considering how much I’ve struggled with the course and felt like I had no idea what was going on, I did well in the coursework which has put my lecturer under the illusion that I am competent.

What I realised was that he likes things done his way and I have no qualms about adjusting my notation and methods to suit him. However there is one guy in my class who started arguing with the lecturer today after he got docked marks for doing something in a different way not taught in the course. I wouldn’t have had a problem if he had spoken to the lecturer in private but he decided to start making his point during the lecture in front of everyone about how ‘real’ mathematicians can accept that there are numerous ways to approach the same problem. The lecturer essentially told him to STFU and I thought the guy would do us all a favour and take the hint but he just carried on.

It very quickly turned into a pissing contest where he’d just start pointing out every mistake the lecturer made, even something minor like brackets. At the end of the lecture he was still moaning and he tried asking other students if we supported his view. I said I didn’t want to get involved and he straight up called us all ‘PUSSIES’. My bad. Sorry for not wanting to be a dick to my lecturer who’ll be marking my exam this Summer.

Personally I don’t see why it’s so hard for him to be flexible- surely that’s also an important skill for a mathematician too. Whatever.

On a lighter note, tomorrow I am celebrating the end of term with my friends by watching the new Hobbit movie. Really excited! Hope it’s worth the hype.

Last Friday I was so happy and relaxed because I had the day off and didn’t have to go to a secondary school and teach. Well I had to go this week and it was like the world was taking its vengeance for me having last week off. Genuinely had the one of the worst lessons of my life.

The day didn’t start wonderfully. The bus I take to get to the station was just epicly late and it was so packed, I physically couldn’t get tissue out of my pocket to blow my nose. Hence my nose was drooling the entire time so everyone was throwing me dirty glances for sniffing. Sorry.  After that the district line kept bloody stopping. It is extremely frustrating sitting in an immobile train when you know you’re late.

As for the lesson… the teacher refused to start until everybody was quiet. That would be the ideal situation but realistically, there will always be one person talking or shuffling or fidgeting or dropping something that makes noise. And there’s always one silly kid in the class that has to say something at the last second and cause even more delays. It genuinely took 25 minutes to begin, in which time me and Shakira were standing at the back twiddling our thumbs and feeling bloody awkward.

There are a few kids in that class that are really volatile. They can flip in an instant. You have to constantly be on your guard because if they’re unhappy, they lash out by picking up the nearest thing and throwing it or kicking it. This might be their maths book or a chair for example. They have no regard for who or what is around. I mean that’s the behaviour of a toddler… just being a pain in the arse to get attention.

Bad attitudes are abundant. I don’t know who these kids think they are. I genuinely fear what will happen to them when they get older. They can’t even speak coherently (‘Did I arsk for your opinion?’). Who the hell is going to hire them? There was one girl who particularly ticked me off. There’s one thing being cheeky but she was downright rude and ignorant.  I asked her a basic question and she said ‘I can’t be bovvered’. I shouldn’t have let it get to me but it did and I blurted ‘then I can’t be bothered to help you’. I know it’s bad. Blah blah I shouldn’t have said it. But why do children seem to have more rights than the teacher? She gets to say whatever the hell she likes but oh noo you can’t retaliate. Bullshit.

Another thing. The language is appalling. They’re only 11/12 years old and some of the stuff coming out of their mouths is vile. I’m not a saint. I swear and use bad language too but never in school and certainly not to the teachers. Seriously-the teacher said something to a boy and he said deadpan ‘suck my balls‘. He got sent out.

Most of the class was held behind for 25 minutes at lunch and the teacher left us unsupervised with for a bit. She’s not supposed to do that -_- As soon as she left, they started packing their bags and putting their coats on as if to leave. By this point I was freaking out. How am I meant to singlehandedly stop 15 kids from stomping out. What am I supposed to do… barricade the door?! Thankfully none of them made any serious attempt to leave (thank you God).

Last but not least, Shakira and me were supposed to be taking this lesson but it got cancelled at the last minute because the teacher was supposed to be inspected. Guess what? No inspector. We slaved away for a week making their resources and getting everything ready and it got delayed for no reason.  Not impressed.

As you can probably tell, I’m in a fantastic mood right now. I’m supposed to be going my friend’s party. She said she would call when enough people had turned up and it was okay to come. I’ve been ready since half 6 and it’s now half 8 and still no call. I am borderline in tears of frustration. She hasn’t texted me back and won’t return my calls. Sitting at my computer blogging in my party gear… I look pretty pathetic. 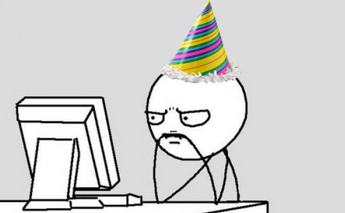